This webpage is for ISWL Special Event and DX News Information,
Including recent DXCC Updates etc

if you are an ISWL Member - Please inform us if you will be operating a
Special Event callsign, OR any other callsign, that would qualify for the
Monitor Award. Including operating away from your home QTH /A, /P, /M etc.

PLEASE let Pete the webmaster know, so that your event can be listed here
and published in the Monitor magazine - Please include full details in your e-mail

Also Check the "Affiliated Clubs Page", for their Special Event News
and the "Club Calls page" for the current list of club call operators

Non Licensed ISWL Members are welcome to register by using
your ISWL number as the callsign, either with or without the " - "
in the number. Use your number as shown on your QSL Cards.

Ham and SWL Registration on QRZCQ.com only takes a couple of minutes,
.......So why not do It NOW.

The above site is not associated with QRZ.com

- is not an active callsign. Any use of this callsign
is a PIRATE. Any QSL sent to YI1IRQ will be returned unanswered

- Johan ZS1A, reports: "ZD9GI went QRT on 15/9/11. There is a pirate operating now with that call.
Please note info on QRZ.com. Please do not send QSL card if after that date.
"There are NO Hams on Gough Island at this time. It will take a few years for one to go down again."

- Johan ZS1A, reports: "ZD9KN has never been issued.
This is a pirate operation. Please do not send QSL cards or money."

- On March 24 & 25 2012 a station appeared on the band signing TO4E,
and sending his QTH as "Europa Island, AF 009". ...This is a Pirate Station.
NO genuine activity has occurred since the dxpedition to Europa in 2003.
NO current activity has been authorized from this island.
The "TO" prefix block used in 2003 is no longer in use.
Access to Europa is forbidden, except under special authorisation.
Didier F5OGL, QSL manager for the 2003, EUROPA Dxpedition will NOT
answer any cards for this Pirate activity.

- Xavier EA3BHK, reports that a station signing FK8IK on
17m CW was active on March 9th, and was definitely a PIRATE station.
He contacted Mic, FK8IK, and he also states it was a PIRATE.

Several links are listed below to DX News outlets, that supply
FREE Top Quality DX News and Contest information,
for both the Amateur and Broadcast bands enthusiast.

Remember - There is NO NEED TO PAY for your DX-News

News, insights and everything about Amateur Radio 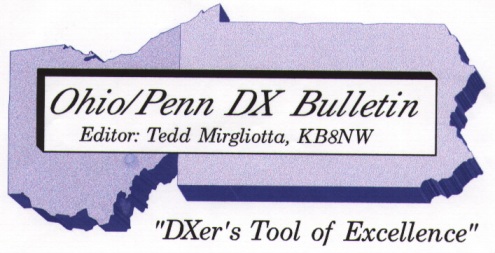 An "Aladdin's cave" of DX, IOTA and Expedition news,
with Dxpedition Movies plus a downloadable PDF DX bulletin

These Archives are a good source of previous DX information

An essential webpage for 6 Metre enthusiasts

A great source of Information Including a weekly newsletter

The reliable news source about International
Mediumwave and Shortwave Broadcasting

Related Information
Including a weekly update via email.

To get onto Bill's lists please send your contest station
and DXpedition information to: Bill@ng3k.com

Feel free to use and distribute these lists as FREE lists

If you have any useful

All Graphics are used with thanks to their originator